Do you know what happened 140, 82, and 25 years ago? No, not other pandemics!  Those are the numbers of years ago a mathematician and statisticians first discovered, then rediscovered and finally proved a statistical law that has fraud-busting application to accounts payable.

Some of you have heard of this before, thanks to the statistician that got involved in our story nearly 60 years after Newcomb. His name is Frank Benford. The phenomenon, called the “law of anomalous numbers” or “significant digit law” is more commonly known as Benford’s Law. In 1938, Benford built on Newcomb’s observations. He demonstrated that the frequency of each numeral appearing in the first digit position, and in the second digit position, of a number decreased inversely with its value. Lower numerals occur more frequently but as the numerals increase, their occurrence as the first (or second) digit decreases.

Fifty-seven years after that, in 1995, Theodore Hill provided a complete proof of the law. If you really want to know, go here (thanks, Project Euclid!).

Here is a table with the frequency of occurrence of numerals in the first two digits: 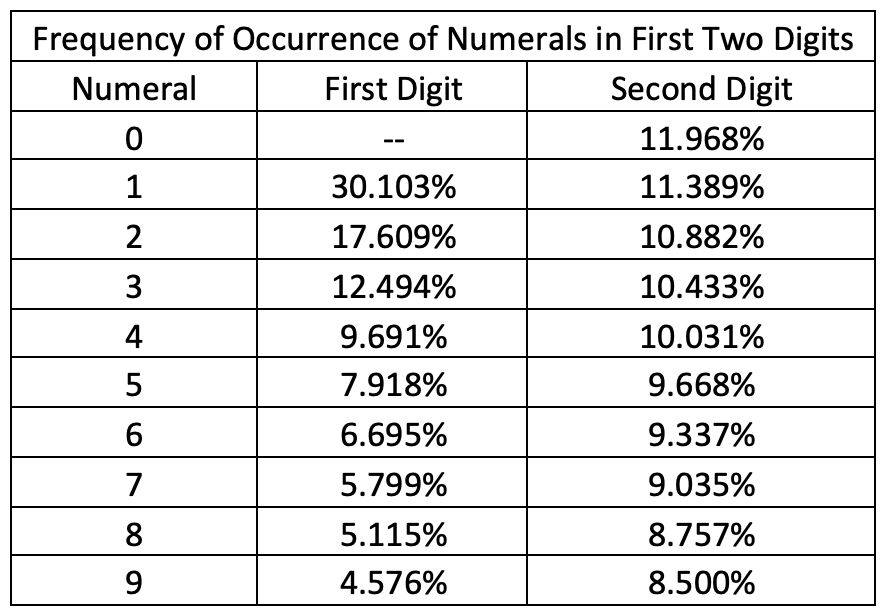 Why should accounts payable care? Because while you’ve got a lot going on, protecting your organization’s assets is a chief responsibility. And Benford’s law can help. Applied to a collection of vendor invoices, it can point out statistical anomalies that might indicate fraud.

Now there could be reasons for anomalies. If a vendor’s invoice amounts don’t conform to the pattern, it’s not certainly fraud. It’s a flag. You’ll want to take a closer look and be careful not to conclude “fraud” until you’ve investigated.

But as an example, there was a case a few years back in which an analysis showed the numerals 4 and 9 occurring in the first two digits of contract values more frequently than should be the case, according to Benford’s law. The internal auditor took a closer look. It so happened that the company had a threshold of $50,000 at which contracts could no longer be sole-sourced. The higher-than-normal occurrences of contract values of $49,000 – 49,999 were traced back to one contract manager. And it turned out that he was upping contract amounts to just under the $50k limit and sole sourcing them to a company owned by his wife.

Often fraudsters start out carefully, on a small scale. As their efforts go undetected, they get more ambitious and increase the amounts, often to just under some control threshold. But the increase in digits betrays them.

Concerned about the possibility of fraud? Get with your internal auditor and IT and start running checks on contract, invoice and payment amount data. Benford’s Law is considered one of the most powerful techniques for finding fraud.

Did you know that InvoiceInfo provides reporting on user activity, contacts, security, and analysis? For more on invoice-inquiry reporting available from InvoiceInfo, contact us.

InvoiceInfo saves labor hours and cost by helping suppliers and internal staff easily and instantly get answers online to their invoice-payment questions.

If you are like many finance leaders today, you are being challenged to reduce costs more quickly. InvoiceInfo delivers real bottom-line results almost immediately, allowing you to deploy your customer service staff to focus on more productive, bottom-line oriented tasks.

Let us show you how InvoiceInfo's vendor self-service portal can help your organization eliminate invoice inquiry emails and calls while enhancing service to your accounts payable customers.

Get Up and Running Quickly and Seamlessly

InvoiceInfo and VendorInfo are standalone applications that can be up and running in as little as two weeks, with little or no IT resources required.

The faster your online portal is up and running, the sooner you will start reaping the benefits. InvoiceInfo and VendorInfo are dedicated solely to helping AP and procurement departments slash the time and expense of servicing vendors, while improving customer service for their suppliers.

InvoiceInfo and VendorInfo are simple solutions with big results. They are easy to implement and easy to use. Here’s how one customer described the process: “You give vendors a URL, provide instructions about what they need to know and tell them to go use it.” It really is that easy.

Improve Productivity with a Self-Service Solution

For most organizations, deploying a technology solution is a significant investment, and like most investments, the decision point ultimately comes down to the expected return on that investment.

According to a recent benchmark study by The Accounts Payable Network, 60% of AP customer service calls are from vendors while 40% are from internal customers. Vendor issues actually make up even more of the AP call volume than the 60% identified. Many times when a vendor has an issue, the vendor contacts their buyer or purchasing representative, who in turn contacts AP. Even though the call comes from an internal customer, the question originated with the vendor.

With a minimal investment of IT time and talent, you can start reducing customer service calls and expense in a matter of weeks. In addition, you improve vendor relations since you are giving your vendors what they want — answers to their questions immediately — a win-win for everyone involved!

Easy and Economical Solution to Serve Vendors Around the World

InvoiceInfo can help you provide best-in-class customer service to your vendors around the world at a fraction of the cost.

Learn how InvoiceInfo can help AP do more with less while continuously improving productivity and bottom-line results.

Many automation technologies such as scanning, workflow, e-invoicing, ACH, and electronic invoicing require significant investments of money, time and talent, making it difficult to get buy-in from upper management. Not InvoiceInfo!

If your goal for your AP department is to reduce costs quickly, call or email us today to learn more about how InvoiceInfo can help you achieve this goal through a quick, inexpensive and easy implementation of a vendor self-service portal.

InvoiceInfo helps suppliers’ AR departments with simple and convenient access to invoice payment status online at a cost savings for all involved.

It may seem that the organization paying the vendor should hold all the cards in the relationship. But sometimes the opposite is true. Past-due payments and customer service perceptions can harm supplier relationships and disrupt the supply chain.

Your vendors and vendor relationship managers are living in a dynamic, fast-paced environment, so when invoice information is required, it is needed quickly and expected to be of high quality. With InvoiceInfo, your suppliers get answers to invoice inquiries real time, 24/7 with no need to leave messages and wait for responses. Studies show that confidence in data increases when suppliers access invoice and payment information themselves.

Not only can InvoiceInfo be used by suppliers to learn the status of invoice payments, it can also be used internally within your organization.

In addition to reducing calls from vendors regarding invoice status, you can also reduce internal emails and calls from co-workers wanting to learn the status of invoice payment, and save time and effort and boost efficiency and productivity across the organization. Studies show that 40% of AP customer service calls are from internal customers. Many of these are from requisitioners who have received calls or emails from the supplier checking on payment status. These calls are often more expensive for the company because the internal staff member has taken the call or received an email from the supplier, contacted AP for the payment status and had to return the call or email the supplier.

By providing the vendor with a convenient and credible online option to get the answers it needs regarding payment status, you can eliminate multiple calls/emails between the vendor and the requisitioner saving time and money.

By sharply reducing inbound calls and emails regarding receipt and payment status that your AP staff must handle individually, your staff can focus their efforts on more productive, cost-saving activities, learn new tasks, feel more confident and boost their careers.

According to a recent American Express survey on customer service, more than one-third of consumers have lost their temper with a customer service professional in the past year. Of those who lost their temper, three in ten “hung up the phone.” Your staff will no longer have to deal with difficult collectors who can be upsetting and disruptive. Your staff will feel that their time and talents are being put to better use and will feel better about themselves, their jobs and their organization. Reducing these calls can be a real productivity and morale booster for your AP department!

According to Price Waterhouse Coopers, the average organization spends about $20 in labor to file each paper document, approximately $120 in labor searching for each misfiled document and $220 in re-creation of a document.

Wouldn’t it be great to have all your W-9’s, W-8’s and other registration documents completed online and instantly filed online for easy access when needed? With Vendor Self-Service Onboarding Module, VendorInfo, you can onboard your new vendors in one convenient location and eliminate paperwork and hassles.

Government regulators are increasing the complexity of regulations and penalties associated with vendor-related non-compliance.

Penalties for incorrect 1099’s have more than doubled in recent years. Over the last several years, OFAC has levied more than $1 billion in fines against American companies or subsidiaries that did business with restricted businesses, organizations and individuals on its SDN list. In addition to fining these companies, the Treasury Department posts the names of infringing organizations along with fines paid.

VendorInfo Onboarding Module verifies the accuracy of vendor information and helps protect your organization by avoiding embarrassing penalties and fines.

Simple to Launch.  Simple to Use.